How to Consciously Uncouple from your Family 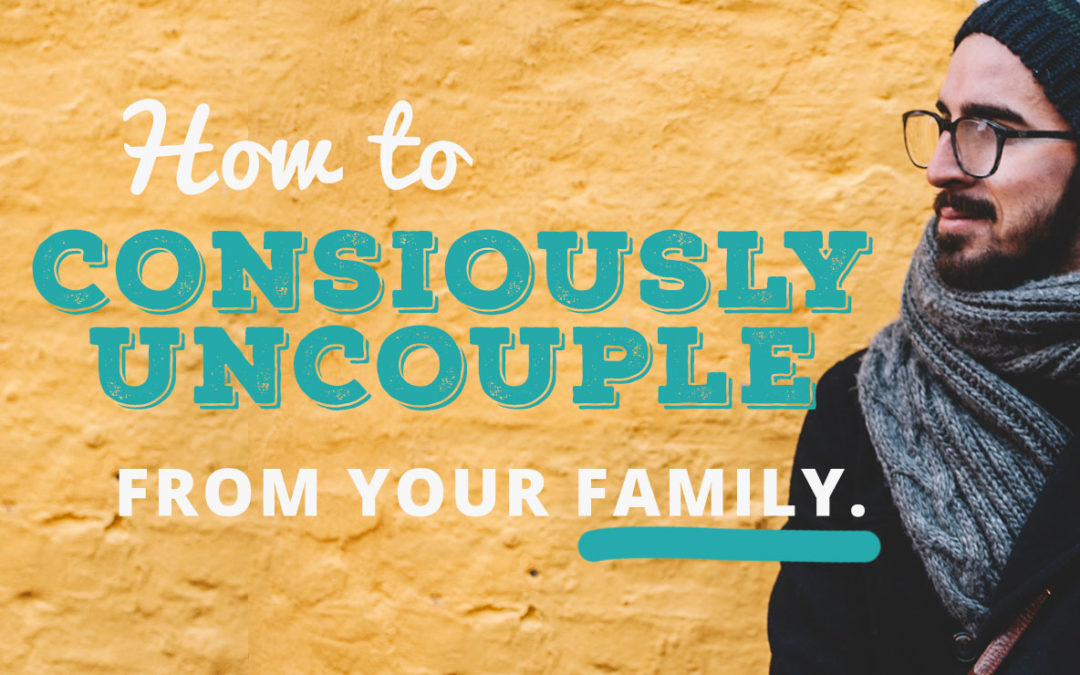 You may have heard about how helpful Conscious Uncoupling is when ending romantic unions, but it is also quite effective with other kinds of life “breakups.”

Last month, I guided you through the 5 steps as it relates to career and work. (Click here to read that article.)

This time, I’d like to show you how to apply these principles with family members. First, a quick recap of what Conscious Uncoupling is.

What is Conscious Uncoupling?

Conscious Uncoupling is a 5-step program that helps you to complete a relationship with a tremendous amount of goodwill, generosity, compassion and respect.

What are the 5 Steps of
Conscious Uncoupling?

The first step is to learn how to harness the intensity of the emotions you are feeling and transform them into constructive energies of positive change.

Step 2: Reclaim Your Power and Your Life

The second step helps you reclaim your power by understanding how things happened “through you” and not just “to you.”

In this step you identify your source-fracture story and understand how it has been an underlying cause of your disappointing patterns in life. In this step you begin learning how to graduate from these painful patterns.

You learn to see yourself as an indomitable force of nature, capable of generating a positive future for yourself and others. You begin making choices that liberate you from the past, and you clear the air of any festering resentments.

Step 5: Create Your Happy Even After Life

In the final step you take on the essential task of reinventing your life,not by trying to “recreate” a better version of what you once had, but by expanding what’s possible NOW, including fresh new horizons, friends and interests.

So how we can successfully use these steps to uncouple from dysfunctional familial relationships?

My client Jamieson* came to me because he wanted to Consciously Uncouple from his long-time girlfriend.  He deeply desired a conscious partner, and intuitively knew that he had to end his current relationship in order to make room for that. During our intake session he shared a little about his background and childhood.

Jamieson was one of two boys, but his mom and dad openly favored his older brother. He was often criticized in front of his brother at family mealtimes, and had difficulty expressing his upset about it.

As a result of this skewed family dynamic, over time he developed a deep identity of “I’m not good enough.”

As we delved deeper into his Source Fracture Story(week three), he realized that his inability to follow his intuition and end his relationship with his girlfriend many years earlier was directly linked so this identity.

The strategies that kept him safe in childhood were no longer working. It was time DIG IN and learn some new ways of relating.

New Ways of Being

At the weekly family dinners at his parent’s house, Jamieson began speaking up and raising objectionsto his father’s critical remarks. He learned to change the tone of his voice, even raising the volume if need be, whenever his brother began talking over him. He set better boundaries with his mother as well, who regularly enmeshed herself in his life in unhealthy ways. He spoke up confidently, without shaming and blaming, but clearly expressing his point of viewin a way that they could hear and be enrolled by.

He learned how to presence himself more generatively in other areas of his life as well, and began receiving positive and reinforcing experiencesthat helped break up and dissolve his old “not good enough” identity.

Although initially uncomfortabledoing these things, (and there was definitely an adjustment period) soon enough his family members got the messageand got on board with the new program.

Surprisingly, he later told me he that he was beginning to “relax” and “enjoy” these family dinners. (I suspect what he was reallyenjoying was a feeling of equanimity with his brother.)

His new-found confidence seeped into other areas of life as well, reducing work stress and the performance anxiety he used to get at the open mic night poetry readings.

By the end of our coaching he had uncoupled from his girlfriend as well, and made space for the conscious partnership he deeply desired.

RECAP: Here’s what the 5 steps of Conscious Uncoupling looked like in Jamieson’s case:

Step One: Instead of staying in overwhelm, isolated and angry about the unfairness of his parent’s favoritism, he resolved to take positive right actionand uncouple from this toxic family dynamic.  He also resolved to consciously complete his romantic relationship in order to be a match for conscious partnership.

Step Two: Although Jamieson was not responsible for the poor choices that his parents made parenting him in his youth, he focused his attention on the present moment, getting clear on how he himself might partially be the source of his currentexperience.

Step Three: His source fracture story originated with the preferential treatment given to his older brother. He graduated from this pattern by learning how to make his presence known(and felt!) in the current family structure. He wasn’t the same little “Jaymo” they knew before, believe you me.

Step Four: Jamieson’s Love Alchemist Processincluded not giving up (or settling) for a life that was less than the one he desired. He gathered his internal and external resources to clear out anything (and anyone) who was not a match for the life he was creating. Some made the cut. Others did not.

Step Five: Although Jamieson’s Happily EvenAfter Life did NOT include “divorcing” his family outright, he divorced himself from being a co-conspiritaor to their unhealthy dynamics.

Once he claimed his True Identity, and adopted the behaviors and beliefs that SUPPORTED and REINFORCED this new identity, he soon began experiencing life differently.

Even if it had turned out that he needed to consciously uncouple from his family, he had the skills, awareness and tools to do it with his personal power in tact.

Bringing it Home to You

So how about you?  Is it time for you to consciously uncouple from someone in your family of origin?  Do new agreements need to be made? A toxic tie cut? A healthier version of the relationship birthed?

If so, I hope that this conversation inspires you to take positive right action so that you are happy and flourishing in every area of your life.

Here’s to You,
Jeanne

P.S. If you would like to book a FREE 30 minute Conscious Uncoupling Discovery session, send me an email at jeanne@jeannebyrd.com.  I have a few spots open!